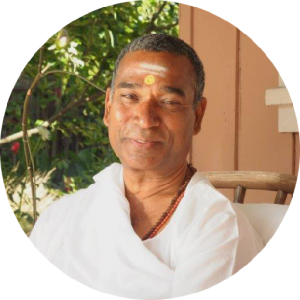 Our Guru, Baba Harihar Ramji, affectionately known as “Babaji,” is spiritual teacher (Guru) and a disciple of Aghoreshwar Bhagwan Ram. He is a role model and spiritual beacon for anyone seeking inspiration and guidance. He radiates love and embodies living with purpose.

Babaji was born in India and spent his early days in a small village outside of Varanasi, and later, within the city of Varanasi.  On July 2, 1990, with Aghoreshwar’s blessing, Babaji started a new life as a monk in the Aghor tradition.

Babaji has spent his life sharing and interpreting Aghoreshwar’s teachings and has touched the lives of thousands of individuals from all over the world. He presents the ancient tradition of Aghor, as well as the progressive teachings of Aghoreshwar, in a language that is accessible and relevant to modern-day seekers. Babaji’s teachings inspire individuals to connect with themselves though Sadhana (spiritual practice) and Seva (selfless service), and in so doing, cultivate inner peace and radiate outer peace.

Following Aghoreshwar’s commitment to social service, Babaji has established numerous initiatives in Varanasi, India, including creating a safe home for orphaned and neglected boys, a school for street children, a center for promoting sustainable agriculture, a women’s empowerment program, and an eye hospital.

A non-profit organization dedicated to combining service and spirituality. The foundation’s projects embrace and put into practice the timeless teachings of Aghor, the ancient mystical lineage with roots in Varanasi, India.

The Foundation is located in the southern part of Varanasi, Uttar Pradesh. A beautiful campus comprises the Bal Ashram and Anjali School, overlooking the River Ganges and the city of Varanasi.